Recovery & Depression: The Link & How to Find Relief

Many people describe feelings of depression around the time when their drinking habits became unhealthy. Others share that they’ve used alcohol to help relieve depression, but it actually made it worse. There’s a cycle at play here: depression is a common driver of unhealthy drinking habits, and alcohol often intensifies depression.

In short, we can’t talk about alcohol without talking about commonly co-occurring mental health conditions like depression. And vice versa! Let’s dive into the connection between alcohol use and depression, and how to find relief from both.

How Does Alcohol Affect Depression?

Alcohol use and depression often become intertwined for a variety of reasons. Both depressive disorders and alcohol use disorder share many behavioral, genetic and environmental risk factors, which can make it difficult to determine which came first.¹ Either way, the symptoms of one can exacerbate the symptoms of the other. After all, alcohol itself is a depressant, a fact that is easy to forget since alcohol seems to appear at most celebrations and is so often used to “relax.” But make no mistake, it is one of the most widely used central nervous system depressants in the world.²

To understand how alcohol affects depression, it’s important to recognize that alcohol has what is referred to as a biphasic (or “two-phased”) effect on our bodies. During the first phase, it makes people feel good; the brain releases dopamine, a neurotransmitter that affects the areas of the brain associated with pleasure and reward. Dopamine also drives us to repeat behaviors that are pleasurable, which is why substances that induce a rush of dopamine can be highly addictive.³ The relaxing effects of alcohol can be particularly addictive for people already suffering from depression.

However, research shows that the initial, pleasurable feelings we may receive from alcohol are only present until our blood alcohol concentration (BAC) reaches about .05%.³ After a person’s BAC rises above this threshold, the second phase begins; a steep downward spiral of negative effects produced by alcohol. The more alcohol one consumes and the faster a person drinks, the less they will experience pleasant effects and the more they will experience the depressant effects of alcohol.³ If someone already suffers from depression, this second phase can be particularly difficult to manage. Many people decide to drink more in order to avoid these depressive effects, leading to an unhealthy cycle of using alcohol to cope.

Finally, it’s important to note that alcohol use can actually change our brain chemistry. Alcohol is a depressant that alters your brain’s natural levels of neurotransmitters, which transmit chemical signals throughout the body and play a big part in regulating thought processes, behavior, and emotion. Alcohol also lowers serotonin and norepinephrine levels, which help regulate mood. These combined effects of alcohol can exacerbate depression both in the short and long term. 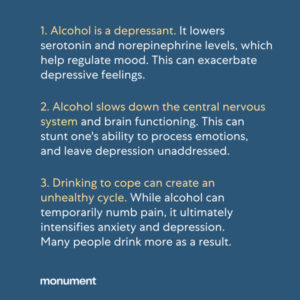 Can Alcohol Use Cause Depression?

The short answer is yes, alcohol can cause depression.⁴

Does Depression Cause Alcohol Use?

Yes, depression can lead to alcohol use as well. It’s not uncommon for people who suffer from depression to try to self-medicate with alcohol or other drugs to alleviate the symptoms of their depression. However, it doesn’t take long for a tolerance to develop, where a person will need more alcohol to produce the desired effect. Drinking more and more alcohol to cope with depression can quickly increase a person’s risk of developing alcohol use disorder, as well as exacerbate depressive symptoms in the long term.

Alcohol Use and Antidepressants

Self-medicating with alcohol can have many harmful effects, especially when also taking antidepressants. The combination of alcohol and antidepressants can be dangerous, and sometimes even fatal.⁴ Moreover, alcohol is known to cause depression on its own, which may render an antidepressant less effective, potentially leading to suicidal thoughts or actions in people who are already struggling with a depressive disorder.

It’s not unusual for people who stop drinking to experience some depression at first. If someone was drinking as a way of coping with depression, their depression may still exist in sobriety and require additional treatment. Depressive feelings may also intensify during early recovery because alcohol is no longer being used to numb emotions. It’s important to note that in the long-term, sobriety can significantly help minimize depression and pave the way for more effective coping skills.

For those who don’t struggle with pre-existing depression, it’s also possible to experience a mild depression in early sobriety. In fact, there’s a term used to describe this experience called ‘anhedonia’. Anhedonia is the inability to experience pleasure – an ‘emotional flat-lining’ so to speak.⁵

Anhedonia can occur in early recovery because there is a shortage of dopamine in the brain while the body is healing from alcohol use. Alcohol produces an excess amount of dopamine in the brain. As a result, the brain tries to balance itself and eventually stops making dopamine on its own. When someone discontinues using the substance that produced the excessive dopamine, the brain is left with a limited ability to produce it organically for a period of time.⁵

Fortunately, the brain can heal itself from this condition and re-learn how to produce dopamine on its own again. This recovery period typically lasts about a month or two, but can sometimes take up to a year or more. However, there are things you can do to help facilitate the healing process. 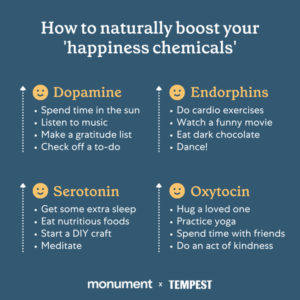 How to Boost Your ‘Happiness Hormones’ Without Alcohol

While alcohol depletes our ‘happiness chemicals’ like dopamine, many healthy activities can naturally boost our mood. Let’s explore a few of them.

Exercise, particularly 30-minutes or more of aerobic activity and strength training, can boost your mental health by increasing adrenaline. Adrenaline is a survival mechanism that elevates the body to a heightened state, alleviating that flat-lined emotional state often described by people with anhedonia.⁵ Adrenaline is also produced in the adrenal glands, which are attached to the kidneys, unlike other emotions that are processed in the brain. This means exercise can help provide a mood-boost even when the brain’s happiness chemicals are dysregulated.

Nutrition can play a meaningful role in depression and alcohol recovery as well. Certain nutrients can either increase or decrease dopamine production. For example, healthy proteins like bananas, eggs, and unprocessed meats contain essential amino acids that can be converted to dopamine, while saturated fats, like butter, desserts, and processed meats can actually lower dopamine production.⁵ Your body also needs certain vitamins and nutrients such as iron, folate, and vitamin B6 to produce dopamine.⁵

Treatment for Alcohol and Depression Recovery

The first step in addressing unhealthy alcohol use and depression is simply asking for help and support. There are a wide range of treatment options available, including online alcohol treatment, in-person meetings and events, and online support communities. Monument offers medication and therapy options, entirely online, to help you change your drinking habits. Treatment at Monument is always individualized to meet the unique needs of each person and address any co-occurring mental health conditions.

However you seek support, there is help available, and you don’t have to do it alone.

Adrienne Webster is a licensed addiction counselor (LAC) in Bozeman, Montana. She received her B.A. in Media Arts from Montana State University and later completed her graduate studies in Addiction Counseling there as well. She works as an addiction counselor in Montana and began working as a recovery coach at Tempest in March 2022. Adrienne is committed to reducing the stigma that surrounds addiction and recognizes the complex emotional and environmental factors that contribute to substance use disorders and behavioral addictions. She is particularly interested in an integrated approach to treatment and recovery that revolves around compassion, education, and support.

15 Reasons to Love an Alcohol-Free Lifestyle